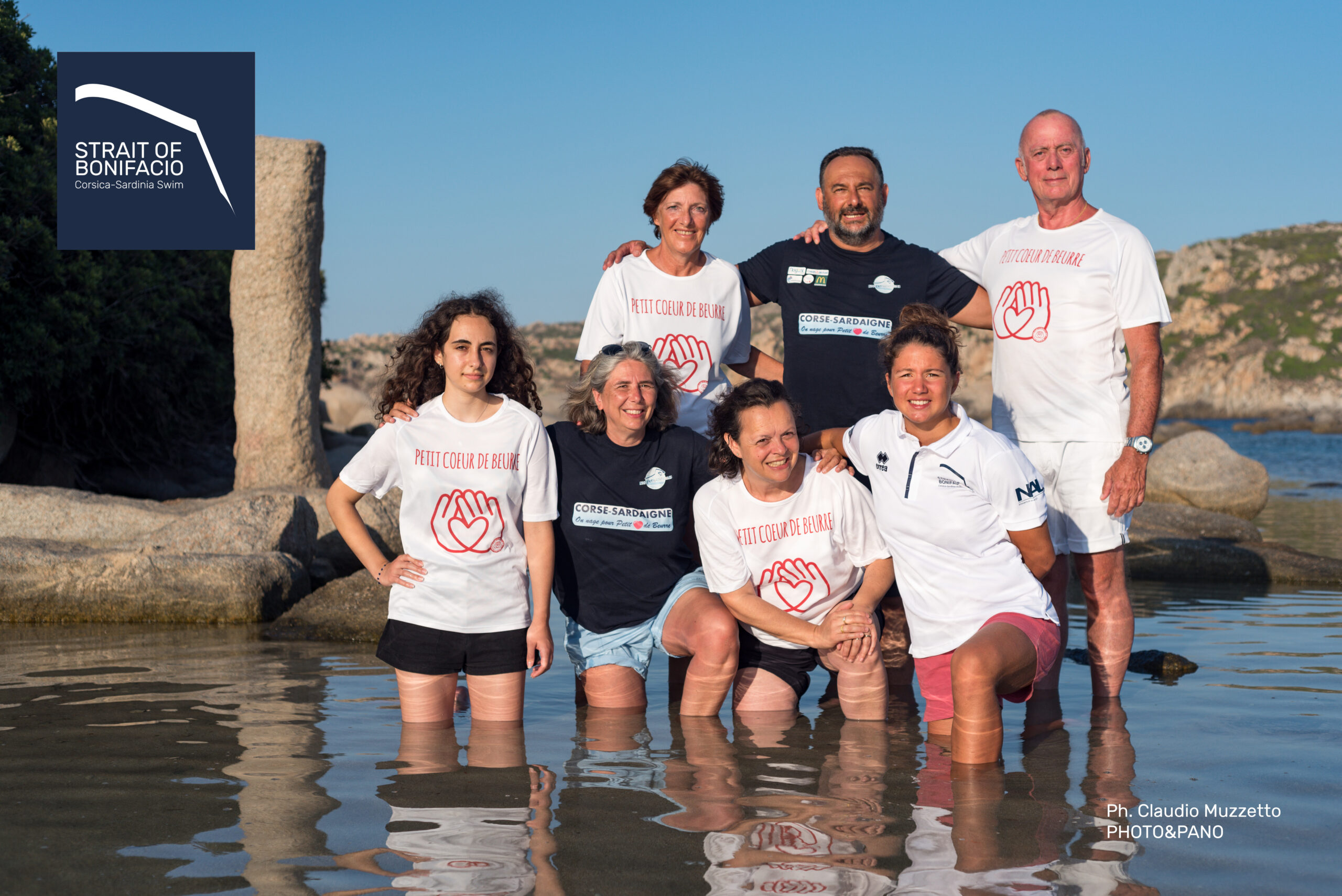 On Wednesday July 20th, 2022 three swimmers from the Nogent Natation 94 successfully swam the Strait of Bonifacio. Clémence Allione, Cyrille Delavaud and Roger Plo-Iversenc have been able to give positive vibes to everyone, also thanks to the collaboration of their sports club with the Petit Coeur de Beurre association to raise funds for the families of children with congenital heart problems.

Nogent Natation 94 successfully manages its first crossing of the Strait of Bonifacio and helps the Petiti Coeur de Beurre to collect over 5000.00 euros in donations

Departing from Corsica in the early hours of the day, the marine weather conditions were optimal: beautiful sun throughout the day, continuous wind but below 10 kilometers per hour, regular waves no more than 30 centimeters high with some waves of reverberation from the trails of the other boats, persistent but moderate and manageable East currents. An environmental situation of this type has certainly avoided further difficulties that the Strait of Bonifacio generally presents.

During the crossing the swimmers remained in groups for 3/4 of the route, while in the last kilometers they had to separate for better management of the crossing and try to ensure that everyone can reach the coast of Sardinia.
Four to five kilometers from Sardinia, Clémence and Cyrille began to increase speed by heading straight towards Santa Teresa Gallura and taking advantage of the lateral current to enter the Rena Bianca bay, albeit with some difficulty near the Municchedda island.
Roger, having a slower pace than his two adventure companions, followed a wider trajectory to try to make more use of the currents. The fatigue that emerged in the last two hours made the ending more complex but did not affect the ending.
Clémence successfully concludes the crossing after 6 hours 38 min 20 sec, Cyrille after 6 hours 39 min 30 sec, Roger after 7 hours 15 min 10 sec.

“Trying to cross the Strait of Bonifacio is less easy than it seems. Tackling this stretch of sea is already an honorable undertaking, but successfully completing it has its intrinsic value and responds to all the personal goals that each sportsman brings with him and that everyone feels in a different way.
All this was associated with a social promotion like the one of Nogent Natation 94, so today the sport has achieved one of its main objective: transmitting values that can be accepted in other realities that do not belong to the sport itself” – commented Alessandro Pilati, coach and organizer from NAL.

Roger Plo-Iversenc, one of the NN94 swimmers says: “This crossing was not only the result of a personal adventure. Our idea with my club Nogent Natation 94, enthusiastic and united, was not to achieve an individual feat or a record time or a relay, but to leave together and try to arrive together.
Since we do not swim just for us, we have decided to support and raise funds for the Petit Coeur de Beurre association, which works for children born with congenital heart disease, their families, hospital structures and research. With this adventure we were able to make our contribution to a cause that is close to our hearts.
To all those who have helped, supported, encouraged us for our collective project and for our beautiful cause Petit Cœur de Beurre, in one single word heavy with meaning and concise: THANK YOU!“